The Coalition leadership team has more than 50 years’ experience in animal welfare.

Our team has decades of hands-on experience as shelter employees, rescue volunteers and kitten foster parents, and we bring this expertise with us when we educate and train others on up-to-date, proven information on how to save kitten lives – a labor of love we have committed to for more than 10 years.

In 2000, it was a tiny, homeless, bright orange kitten that Lora fostered shortly after accepting a job at a small, progressive Montana shelter that launched her into a career in animal welfare. Later named Chuck, he lived with Lora and her husband for 18 years, and was the inspiration behind her work to expand the shelter’s foster program, in an effort to save more lives. She went on to become an animal behaviorist, opened a dog training company, and then became the shelter’s outreach coordinator, introducing a critter camp for kids and expanding the volunteer program. Filling in a vacant executive director role in 2007, she remained in that job for almost a decade, increasing the adoption rate from 75 to 98%.
“I’m 100% positive the reason I stayed in the field were the many continuing education opportunities afforded me. Coming back from a conference, I always felt energized to help more people and pets. I’m thrilled to be able to focus on getting kitten-focused life-saving resources to animal protection agencies throughout the country.”
Lora lives in Missoula, Montana and shares her house with her mountain biking obsessed husband, a deaf Australian shepherd mix named Wyatt and a temporary foster cat, Tom. She has decades of fond memories of recently passed pets—Chuck, Henry and Phoebe. Lora also enjoys boxing, yoga, traveling, and Chicago Cubs baseball.
Lora can be reached at lora@kittencoalition.org or 406.543.2633. 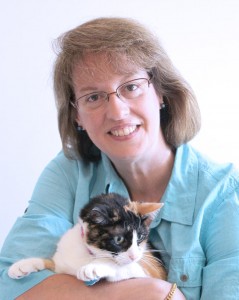 Rosemarie Crawford is a licensed veterinary technician who has worked in animal welfare for more than 15 years. She has experience in public and private shelters and in veterinary practices. As a medical staff member in a high-volume, open-access shelter in Illinois, Rosemarie worked closely with the shelter veterinarian to provide for the animals’ medical and surgical needs. She assisted in developing and implementing progressive, proactive protocols for the care and treatment of kittens in the shelter’s kitten nursery room as well as for those in foster care. Additionally, Rosemarie served in two shelters as the foster coordinator and understands the challenges of creating, expanding and maintaining a foster program as well as the rewards such a program can reap via the involvement of volunteers. During times of disaster, she serves as an emergency responder with several national organizations to provide rescue, shelter, veterinary care and transport for affected animals. For many years, she also served as a volunteer instructor for Humane Society University, teaching extended workshops in the United States and Canada on Emergency Animal Sheltering, Disaster Animal Response and Animal First Aid. Prior to focusing her efforts on animal welfare, Rosemarie taught high school and college English for 10 years, and her passion for teaching comes through in the workshop presentations. Currently, she also works at a large, six-doctor veterinary practice in the greater Washington D.C. area and fosters neonatal, injured or debilitated kittens for several local shelters and rescue groups. 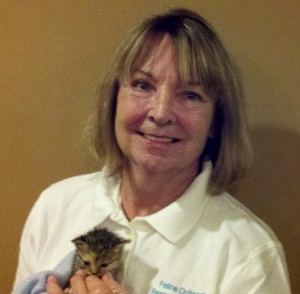 Growing up on a small farm, Susan has been surrounded by animals her entire life. Though she began fostering dogs in Northern California, her passion for kittens began in South Texas in 1994 when a box of 13 underage kittens was brought to the thrift shop where she volunteered for Hill Country Animal League. Upon learning that they would immediately be euthanized at the shelter, she took them home to foster and never looked back. After moving to Northern Virginia she was fostering 200-300 kittens annually; her frustration grew as she realized that even many veterinarians did not have the training or hands-on experience with these tiny babies, and most of the information available was incomplete at best. She began doing research and contacting veterinarians nationally. Today, she is known as the “kitten mom” and is widely celebrated for her expertise in caring for neonatal orphans and special needs kittens that others have given up on. Working with veterinarians, Susan has developed cutting edge protocols for successfully treating upper respiratory infections and Panleukopenia. She has advised national organizations as well as dozens of local shelters and rescue organizations on neonatal issues and received numerous awards for her work from the shelter, rescue and veterinary communities. She lives in North Carolina with her husband, six special needs cats, two dogs and a feral colony. When not caring for kittens, she loves spending time with her grandchildren and enjoys gardening, cooking, reading science fiction, playing in her crafts studio and any type of needlework.

After many years as a donor to various animal rescue groups, Laura decided in 2007 to become more active and volunteer at local Washington, D.C. animal shelters. Focusing on cats, she got ever more involved in helping them care for and adopt out the hundreds of cats and kittens that found their way to them. Today, she fosters back-to-back litters of kittens (the total has grown to 200+ kittens so far).  Laura joined the National Kitten Coalition in 2015 because, as a foster, she appreciated how little she knew about how to care for sick kittens, and respected – and craved – the expertise of the National Kitten Coalition founders after taking one of their all-day workshops. Laura contributes her organizational, data analysis and writing skills to the organization under the watchful eyes of her two rescue cats, Roxie (The Thug) and Fiona (The Princess).